skip to main | skip to sidebar

I may not get to Carnegie Hall

Now, that's a huge turn-around from someone who cooks from the seat of her pants and was considered a better foot tapper than flute player in high school...nah, to me, repetition always felt redundant.

But something about making pasta - and making it well - demanded I keep trying. I mean it seems easy enough:

Combine them simply...mix, knead and roll...

And you create a firm yet velvety bliss to become a cooking icon where your skill is extolled in smugly jealous whispers about over-achievers who never buy dried fettuccine...

Whoops...my fantasy got the better of me...

After visiting Italy in September, I came home aching for the extraordinary flavor and texture of fresh pasta. There is nothing like the taste of pure wheat that feels dense on your teeth and is more than a vehicle for sauce. After four attempts feeding gracious family members, I received a couple accolades for my almost-there pasta but could not figure out why it was alternately grainy, clumpy, tough or sticky. Until...

...until I did two things: One, realize I was making a dough and two, realize I was making a dough. The first is important because if the mixture was coming together too dry, I could add a bit of water. Duh! And the second is important because I needed to increase elasticity that happens when you form gluten in the dough...and how do you do that? You knead it to smoothness, then let it rest.

Did any recipe I consulted tell me these things? Nope! Should I have "known" these things by intuition? Probably. But sometimes, intuition only kicks in with practice.

Armed with this epiphany I set out to try again, ravioli this time and two different fillings and ya know what? The fifth's the charm...

Small print: Blaming technology first - silly me - we thought the extruder on the Kitchen Aid may've contributed to my less-than-perfect pasta. So my sweet, hungry, toy-crazed guys put a bona fide Italian pasta maker under the menorah. I hear a rolling pin works well too...

Pasta (makes about 1 lb)
- Dump 400 grams 00 flour mixed with a healthy pinch of kosher salt (about 2t) onto (clean! Do I hafta say that?) counter and make a wide well in the center that will contain the liquid.
- Pour about a T olive oil into the well and then beat 4 whole large eggs and 1 additional yolk and add to well. Have a cup of room temp water handy in case you need it.
- Slowly, using a fork (yuck) or your fingers (yay) begin to pull in small amounts of flour into the egg mixture gathering more and more flour from the center until you can 'break' the walls of the well without getting eggs everywhere.
- As you pull everything together, this is where you might need a splash - really 1T at a time - of water to help incorporate all the flour. More small print: I didn't think it mattered if I couldn't work in all the flour, but with a small bit of water you can...and more flour means more gluten and more gluten means smoothness and strength.
- Now, the work begins. Knead that baby in long strokes til your arm hurts, then knead it for another 10 mins...or better yet, ask your Master Mixologist to do it! Really. I didn't knead it enough and it wasn't until I went past the 'oh, it's OK like that' stage that I saw and felt the transformation. It became soft, smooth and creamy while not being wet. That's when I knew practice makes perfect.
- Wrap the dough in plastic, flatten in a disk and let it rest on the counter for 30 mins to an hour.

No futzing for at least a half hour! Plenty o'time to whip up a filling or two for ravioli. In anticipation, I'd roasted small chunks of a whole butternut squash tossed in olive oil and coated with kosher salt, white pepper and cumin in a 425-degree oven for 35 mins until it was soft and easily smooshy. This became the basis for Rav I and frozen spinach became the basis for Rav II.

Spinach Ricotta Ravioli filling
- Thaw about 12oz frozen spinach (nuking it is fine, just don't 'cook' it) and squeeze out the copious water.
- Add about 1c ricotta, a beaten egg, kosher salt, freshly ground black pepper, about a half t freshly grated nutmeg and about a quarter t cayenne.
- Combine well and pop into it's own quart-sized zip-top bag.

Now's a good time to put up a pot of well-salted water to cook the pasta and lightly flour some tea towels or baking trays lined with parchment as a landing area for the just-filled or rolled out pasta. Oh, and get out a cup of water and a pastry brush.


Cut the pasta into quarters making sure to keep any pieces you're not immediately working with covered. Take your first quarter and starting on the 0 (or widest setting) start rolling the dough...we did it 3 times each on the 0 and 1 settings and sequentially moved on to #6 so the dough was less than a mm thick - I think.

Now, the assembly:
Take the rolled pasta and paint it lightly with water on one side, then snip a corner of your filling bag so the hole has about a half-inch diameter and squeeze a nice T of filling onto your sheet, leaving about an inch-and-a-half between dollops.

These pix show how I placed the filling so I could fold the top of the pasta over it, press it down over the filling so the air isn't trapped inside (so the flavor explosion is in the mouth, not the cooking pot!) and sealed by the water we 'painted' earlier. 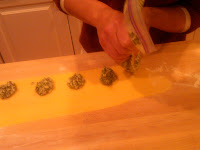 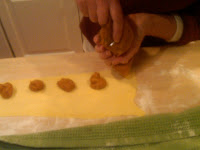 Cut out the raviolis and place on the towels or trays...like this: 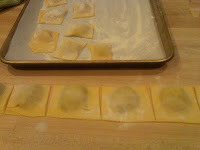 And boil til they float or freeze...Yum! Oh wait, I forgot the sauce...

- In a saute pan, gently melt 1 stick butter and as it slowly browns, add 3 bruised rosemary stalks.
- Thinly slice 2 large shallots and mince 3 large-ish garlic cloves and add to butter to sweat.
- Add salt and pepper...then add a half c boxed chicken stock....let all soften, then raise heat and bring to boil to thicken a bit.
- Mix in a third c parmesan and then a quarter to a third c heavy cream...simmer, but don't boil...check seasonings, then add cooked pasta to sauce to coat, comme ca: 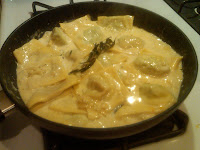 Whew...that's everything! Well, everything except how ridiculously delicious it is. Unbelievable, actually...and all it took was a little practice...

And while I may not get to Carnegie Hall, this pasta did get me back to Italy and put a little symphony in my mouth.
Posted by suzanne esterman at 9:15 PM No comments: 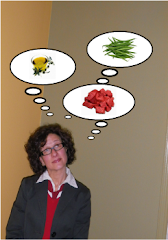 suzanne esterman
Skillman, New Jersey
When I started cooking, I wouldn't fry an egg, make a sandwich or boil pasta without a recipe. Now? Recipes be damned! ; ) I'm a chef.